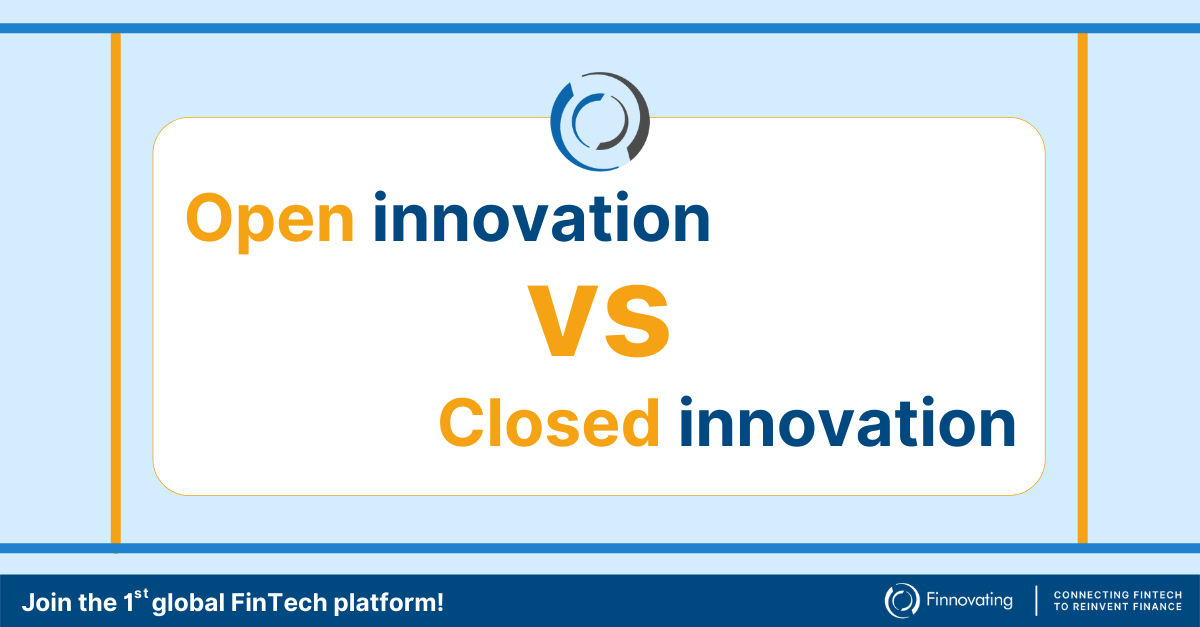 In any business, especially one in the FinTech marketplace, companies need to innovate using either what’s known as open or closed innovation, but it might be a challenge to know which one is better for your business. This is why you should learn about their differences, as well as their advantages and disadvantages.

Difference between open and closed innovation

The conceptual difference between these two innovation methods is open innovation relies on external knowledge sources and thought leadership to inspire the next concept that leads eventually to a new feature or product. Closed innovation is the opposite, drawing instead from a closed, internal system of thought leaders and workers in a self-contained, innovative environment. Both have their advantages and both can lead to disruptive innovations that are worthy investments.

Advantages and Disadvantages of Open and Closed Innovation

Different companies benefit in different ways from open or closed innovation. One advantage of closed innovation is that the extremely difficult work of the conceptualizing, planning, workshopping, and eventual building a new feature or product is done inside a very clear, internally designed structure. This helps employees of a startup, for example, get guidance for their ideas and often get quicker and more useful feedback earlier in the process. Another advantage is that, within this highly-regulated and controlled system, legal compliance for new products and features becomes much less complicated.

Open innovation has its advantages of course, too. Because an open innovation approach draws from both internal and external knowledge centers, this mode is more open to disruptive ideas that could improve the product, even if the time to market is delayed. Innovators also have more access to research and other information that may have a large impact on the final product. Open innovation is usually less expensive overall than closed innovation because innovators can rely on others’ research more often.

There are disadvantages, of course, to either approach. Closed innovation, for example, can cause innovators and thought leaders to lose focus on what competitors are doing in the industry. Because closed innovation is a closed system, thought leaders can struggle to implement helpful outside ideas and research. This can also lead to duplicated work and tightly-regulated internal budgets.

Investing in companies that innovate is paramount to finding profitable choices in the FinTech marketplace. To view FinTech companies that use either approach effectively or use a blend of each, visit the Finnovating Platform, where you’ll be able to learn more about many different companies and their unique approaches to innovation.

You can find highly successful examples of companies using open and closed innovation everywhere. Apple is a famous example of highly successful closed innovation. Apple utilizes software that is highly coordinated and integrated, with no outside implementations allowed. This strict grip on their products and the way they design new iterations allows Apple to maintain its brand integrity by avoiding imitations and modifications from outside actors. This, in turn, lets Apple maintain its distinctive design for all of its products and iterations. You can see this closed innovation system working whenever Apple releases a new product. You don’t hear anything about the development of the product until it launches.

One extreme example of closed innovation is the shift Facebook took over the last six or seven years when it began commoditizing content creation in addition to having complete control of consumption on its massive social media network. Facebook, as we all remember, began as a small-scale online social network at Harvard. As it expanded and became more powerful, its very much open innovation model closed down into a tightly controlled, fortified, closed innovation powerhouse.

In general, the battle between open and closed innovation, particularly in the FinTech space, is being won by open innovation acolytes. Many new companies are drawing on any resources they can get access to produce disruptive ideas, concepts, and eventually products.

One classic example of open innovation is Coca-Cola. The beverage company based in Atlanta, Georgia helped develop the fountain dispenser machine in 1960, now a ubiquitous item in the food industry. Today, the Coca-Cola team starts to develop new flavors by asking soda drinkers all over the world to mix and match flavors using Coke’s Freestyle Dispenser Machine. Users can mix flavors and submit new combinations to the Coke team using a smartphone app.

Today, many companies are realizing the advantages of open innovation because it has never been easier to collaborate with different teams all over the world, and to borrow concepts and ideas from thought leaders and innovators everywhere.

Top most active InsurTech in the Finnovating platform!

hese are the most active InsurTech by members of the Finnovating platform. Startups, companies and…

Interview with Rubén Bajo, Head of Spain at HUBUC

Interview with Rubén Bajo, Head of Spain at HUBUC. Startups, companies and investors from 116…

Be part of the Finnovating Community
Download our reports